First of all, you need to know the difference between suggestions and criticism. Hopefully most of what is said is in the form of suggestions instead of criticism, but that is not always the case and/or some of it comes across as criticism instead. In any case, at least listen to suggestion and criticism and then take it from there.

The Difference Between Suggestions And Criticism

The definition of suggestions is an idea that someone proposes. The definition of criticism is the expression of disapproval of someone or something based on perceived faults or mistakes. Right away, I think, that anyone can see that a suggestion can be either negative or positive, whereas criticism implies negativity right away. Collins Dictionary says that an idea or plan is put forth by someone to think about, which means that one can think about it and then either accept it and act on it or deny it and dismiss it and do nothing more. A criticism implies that you did something wrong and implies that you need to do something about it. Either correct it or accept it as your mistake and do whatever is advised.

How Does One Respond To A Suggestion? 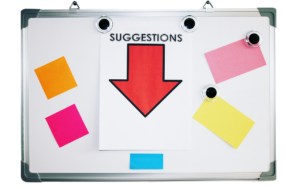 One needs to look at the suggestion and then research it. You need to make a couple of plans and if pertinent discuss it with others that are involved. Research it on the computer if need be and think about it using the problem solving technique. Perhaps an alternative suggestion might be relevant. With a suggestion you at least have a choice and it is not necessarily negative. In this situation, you are a part of the end decision.

How Does One Respond To A Criticism?

When there is a criticism, you may not have a choice in the end decision. You may be given an ultimatum and you will have to do as you are told to do by administration. Hopefully, you will be given a chance to explain why you did whatever you did and be given the chance to review and research it and come up with a plan or response to the problem. When it is a criticism negativity is implied right away. All you can do in this situation is to be open and be try to come up with ways to correct it. In either case it is important to deal with it and not ignore or hide from it. Many people try to ignore a criticism, but that usually just gets you in deeper.

It is not going to go away, so listen to both a criticism and to a suggestion and then decide what you want to do about it. Management will have a better opinion of you if you do this instead of ignoring it. It shows that at least you are willing to try to work with them. especially when we are talking about a criticism. With a suggestion, administration will probably give you other opportunities in the future if you are open to the one they just gave you.

Managers Need To Be Aware Of How They Present Things

As a manager try to remember what it was like when you were a staff member. How did you feel when a supervisor criticized you? Were you hurt? Were you angry? Were you ready to throw in the towel? These are all feelings that one has when this happens. If possible, as a manager try to make it a suggestion instead of a criticism. People usually listen to suggestions and try to work on a solution. It may address the same issue, but the outcome will be different. It certainly is worth a try. Staff members need to remember that no one is perfect and we all make mistakes. If your supervisor makes a suggestion try to benefit from it.

Business Owners Are Not Exempt

Have you ever got negative feedback from a customer? I have and often times my initial reaction is anger. How dare they criticize me? It happens and we need to listen to this and do something about it. Several months ago I got an item returned to me on EBay saying that it was broken. I sent it in its original packing which was a hard plastic. There was no way that it could have even been dropped from the Empire State building and have the damage that it had when I got it back. I, first of all, don’t send damaged items and second of all if they didn’t like the item all they had to do was return it. They did not need to damage it to get a refund. I was irate.

Anyway this is just an example to let you know that it does happen even when you own your own company. You just need to look at it after you have calmed down and ask your self what you can do to make it better. Sometimes other business owners will make suggestions about your business and how to improve it. In this situation it is to your benefit to listen and evaluate it and then decide what you want to do.

The company that I have learned from, which is Wealthy Affiliate, is a wonderful company to teach you first of all how to make a website for you online business and how to market it and it has a great support system to help you make the best online business you can. Sometimes, it comes in the form of suggestions which may help you improve your site and increase business. We can all use help to do things better. Once in a while it comes in the form of criticism, although that is rare. Most of the time it is definitely positive and it really helps you to make things better. None of us are experts, so accept the suggestions and do whatever you need to do.

If you are ready to start an online business, click here.

It is difficult to get criticism, but in the end it may actually help you. How one responds depends on how it is presented. Many times we can learn from criticism if it is done in a positive way or a way to help you see what you did wrong. A suggestion usually is presented in a more positive way which makes it easier to deal with. Either way try to be open and come up with alternative actions.

If you have any questions or comments please leave below.